– My first blog review for The Imaginings appeared last Saturday at the site of blogger/“the happy horror writer” Aniko Carmean.  Hope you’ll check it out.  She had some great comments and an interesting bit of food for thought for me about the ending (don’t worry, she gives a spoiler alert).  To read the review, click here.

– On the same day, I was also interviewed at Jonathan D. Allen’s Shaggin the Muse.  Jonathan had some great questions for me, and as always, he has provided some great visuals to accompany my responses.  To read the interview, click here.

If you think you know how this one is going to end up, you might be surprised.  Next Friday, I’ll be posting Part Two of The Terrible Old Mr. Roogs, A Two-Part Christmas Ghost Story.

For any of you who don’t know, in addition to writing, I’m also a part-time Language Arts teacher.  I’m not Mr. Roogs (in fact, I’m pretty popular with the kids if I do say so myself :), but there are definitely some days…

That seemed fitting for the season.

And NOW without further ado… 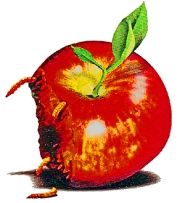 Benjamin Roogs sat at his desk grading final papers.  It was a cold, blustery night in Rapid City, South Dakota, and as it was his last day of work before Christmas break, Mr. Roogs would’ve much rather been sitting in the quiet of his home with a hot cup of cider, spending the evening with the only woman in his life… Emily Dickinson.

Everyone else had gone home hours ago.  They claimed it was the blizzard coming in and told Benjamin that he should leave, too, but he just grumbled at them. Mr. Roogs wasn’t about to take these essays home, to taint his time away from the parasitic teenagers he dealt with on a daily basis, even if it meant staying here until midnight.

“Twenty-five years,” he grumbled as he scribbled blood red ink across the pages of yet another inane student literary analysis, something about Edgar Allan Poe being the 19th Century’s version of the 21st Century Scream-o music.  “What the hell is Scream-o music, anyway?” he asked aloud to no one.  Twenty-five years of teaching, and the students just got weirder every year.  He just didn’t understand kids these days.

Deciding there couldn’t be much of value in the rest of the essay, Mr. Roogs stopped reading and just started putting red “X’s” across large passages of text, and on the last page, he wrote a giant “F” that took up most of the page, retracing the letter a few times for emphasis.  “Maybe you can scream-o about that,” he said and laughed.

He was leafing through the remainder of the essays, looking for another one that he knew would be completely asinine, when he heard something coming from out in the halls of the school.  He paused, and cocked an ear toward the door.  Some sort of faint electronic chiming.  It sounded like…

“A cellular phone,” Mr. Roogs said and grinned.  Some kid had left their phone at the school.  “Aww, that’s too bad.”

Mr. Roogs hated cell phones.  He rose from his desk and stepped out into the hall to find the phone.  Maybe it belonged to Robby Thatcher, the poor sap.  The sophomore had stopped into Mr. Roogs’s classroom after school to supplicate like so many of the worms.

“It’s too late,” Mr. Roogs said, trying to suppress a grin.  It was one of his favorite sayings.  “It’s too late.”

“I know I haven’t done everything you wanted us to do this semester,” Robby said. “I have my reasons, but I know you’ll just say they’re excuses.  Have you at least read my essay yet?  I really worked hard on it.  I would hope it might at least get me to a passing grade.”

Now Mr. Roogs actually did smile.  “It would have to be a pretty amazing essay, Mr. Thatcher, and to be honest with you, I just don’t think you’re capable.”

“But my parents said that they would take away Christmas if I failed your class.”

“Take away Christmas?” Mr. Roogs said.  “Finally some parents with guts.  If you would rather fail my class, then they better do it.  Probably be for the better, decrease the surplus consumerism.  Now, good night, Mr. Thatcher.”

Robby’s shoulder’s dropped.  “Well, I had to at least ask,” he said.  “Thanks anyway, Mr. Roogs.  Merry Christmas.”

Mr. Roogs just grumbled at him.

He continued to grumble now as he walked down the hallway in search of the phone.  “Take away Christmas,” he said.  Benjamin Roogs highly doubted that.  He probably just wouldn’t get the newest epod or msrp player, or whatever.

The sounds of the phone echoed along the walls of lockers, but even with the tinny sound and reverberations down the hallways, Benjamin picked up the tune.  It was a Christmas song.  “Carol of the Bells.”  He followed the sound.  Maybe he’d smash the phone when he found it.  No one would ever know.  But as he continued his search, the ring of the cell phone never got any louder, almost as if…

“Is there somebody here?” Mr. Roogs shouted.  “You’re going to be in a lot of trouble for being in the school after hours, my young friend.”  He picked up his pace, his hard-soled shoes clapping down on the linoleum floor.  He rounded two corners, past the science lab, and the library, but still the ringing eluded him.

Finally he came to the top of the long flight of stairs leading down to the gymnasium and one of the exits out of the school.  He walked slowly down the stairs.  “Last chance to come out,” he shouted.  At the bottom, he looked over at the exit.  Still chained.  The ringing chimed from behind the doors to the gymnasium, with the echoing magnified even more in the large open room.

But there was something else.  It seemed to be getting louder as Benjamin stood there, just outside the doors, louder than any phone he had heard.  He took a step back as the ringing– the hauntingly shrill carol– continued to escalate, and he saw flashing red and green lights from under the door.

Mr. Roogs decided he didn’t like this anymore.  He patted his pockets, but he had left his keys to the exit on his desk.  There was a phone in his room, too.  Maybe he should call the police.  He turned from the gymnasium, and crept quietly back up the flight of stairs and started back to his room.

As he came around the last corner, he noticed that his classroom was dark.  Had he turned off the lights when he left?  He approached his classroom door, but jumped back with a little yelp when he saw something floating in the air in the middle of his darkened classroom.  Suddenly a multitude of little blue squares lit up on the floating figure, lighting up the classroom, and Mr. Roogs could make out a face.

“Mr. Lamrey?” he asked.  That couldn’t be right.  The old principal had died more than ten years ago.  But now he floated above the desks in a tangle of phone cords and cellular phones, his sallow and drawn face bathed in a ghostly blue glow.  “Is that you?”

Benjamin knew he must be dreaming.  He had probably fallen asleep grading papers.  This was all a dream, induced by stress, so he might as well play along.  “What’s happened to you, Mr. Lamrey?  You were the best principle ever.”

“What are you talking about?  You ruled with an iron fist.  Those kids feared you.”

“Compassion should’ve been my strength,” Mr. Lamrey said.  “And now this is my penance.”  He shook at the web of phones that hung from his shoulders.  “This is what you will become too.  You have to see.  You have to know.”  He reached into the folds of cords with one withered hand and pulled out an apple.  “Eat,” he said.

All of the cell phones began flashing and ringing in loud, peeling sounds, and Mr. Lamrey cried out “Benjamin Roogs!” with a voice so fearful, Mr. Roogs dropped to his knees, clutching his ears.  If this was a dream, Benjamin wanted to wake up.

“Okay, okay, I’ll eat it,” he said, and the room went silent.  He reached up, took the apple, and bit into it.  It was mealy and sour, but he swallowed the piece.  He started to take another bite, but noticed a black worm wriggling out of a hole where he had just bitten.

Mr. Lamrey laughed.  “That should do it,” he said.

I know it’s hard to judge it too much until you’ve seen the end, but what do you think so far?

And if you have another moment, don’t forget to drop by “the happy horror writer” or “Shaggin the Muse.”  Besides reading nice things about me of course, their blogs are definitely worth your time.

Finally, don’t forget to check back next Friday for Part Two of The Terrible Old Mr. Roogs.

25 thoughts on “The Terrible Old Mr. Roogs- Part One of a two-part Christmas ghost story”