My big news comes from the World Horror Convention (hereafter: WHC), and isn’t necessarily big news yet, but I had three publishers who wanted to see either portions or the full manuscript of The Imaginings.

This was one of my main goals.  I know that writers can no longer live in a vacuum, and that we must promote ourselves, but for me, I was looking for an organization that knows the business better (and has more connections) than I do.  Is that a worthwhile tradeoff for percentages?  Too early to tell, but I’d like the option at least to decide, so keep your fingers crossed for me.

I had a few people tell me how much they enjoyed my nonfiction pieces (The Sweat Lodge in Ejido Erendira, Mexico), so next Friday, I may dig back into the archives and pull something else out along those lines.

I have never been to a “Con.”  I’ve been to a writer’s conference, but it wasn’t genre specific, and it was almost seven years ago.

So I wasn’t sure what to expect.  Like a horror movie, this is perhaps the best way to go in.  That way you won’t be disappointed if things don’t go how you expected. 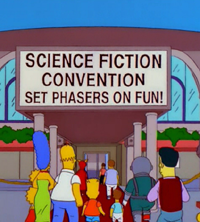 Speaking of disappointments, let me get those out of the way first (neither of which the organizers of this year’s WHC had much control over).  The first was that I was hoping for a little more of the fans of the genre as opposed to industry/writers.  One of the organizers put WHC at about 25-75% (fans-industry).

Don’t get me wrong, I love talking with fellow writers and collaborating and getting ideas going.  Writers are a very supportive lot, but my memory from the Maui Writer’s Conference was that it often felt more like a give-and-take (“I’ll buy your book if you buy mine” sort of thing).  Admittedly, I’m as guilty of this as the next writer, but fans are just looking for something new to read.

And honestly, I was hoping to see some of the freaks (term used very lovingly) that you see at the Fantasy and Sci-fi Cons.

My only other complaint was that I always felt double booked, seeing as there were often three and four things going on at the same time.  It was definitely scheduled well (without many instances of more than one “big” event happening at the same time), but given the pitches and readings, I felt like I missed half of the convention.  But hey, maybe if I land a publisher from this experience (knock wood), I’ll get to see more of the panels next time.

Having said all of that about fans vs. industry, one of my favorite parts was meeting a few of the writers I had only previously met online.  And just as they are online, they are supportive in person (thanks again to Stacey Turner, CW LaSart and Julie Jansen for coming to my reading).  This was both a strange and entertaining phenomenon to match perception with reality.

However, as I had suspected, I now know that some of these folks would be my friends in real life just as they are my “friends” in the blogosphere/Facebook/Twitter reality.  I probably spent almost two hours with Stacey and her sister, Dani, in the bar, and we really only talked shop for maybe a half hour.

Speaking of the bar, my favorite story from the weekend also took place there.  I’ll abbreviate this story and just say that earlier in the evening at one of the publisher parties, in a round of quick introductions, I met a few guys who seemed to be in the “upper echelon.”  As usually happens in these types of introductions, they kept talking to one another and I stood listening and looking for an opportunity to interject something interesting.

Not much luck, and eventually I decided to head to the bar to start a tab and then circulate (the cash bars were ridiculous).  As I was ordering a drink, one of those guys saddled up at the bar.  Network, I thought and offered to buy his drink.

“Mike, right?” I said and leaned over to get a better look at his nametag for the full name.  “Mignola.  Your name rings a bell.  Are you one of the special guests?”

(some of you may already be chuckling at this point)

Turns out he was, but didn’t say much more than he was a comic book guy.  I told him that I wasn’t familiar with graphic novels and such.  Not that I didn’t like them, just that I had never been exposed to them.

We must’ve talked for ten or fifteen minutes (during which I asked things like “So are you making a living off your craft?”– remember that detail) before I figured out who he was when he made the comment, “Most people only know my character from the movies.”

Suddenly the posters from around the convention (as well as the cover of the booklet for the event) and I figured it out. 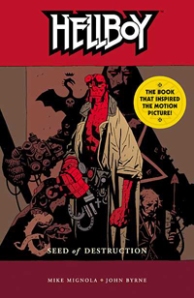 I was talking to Mike Mignola, the creator of Hellboy.

Needless to say, I bought him another drink.  “The first,” I said, “was because you seemed like a nice guy.  The second is out of deference.”

Anyway, what a cool guy.  We hung out for a couple of hours.  We definitely talked more about the business, but since we came to it from different angles, it was more like two buddies talking.  And we also just talked about life, kids, etc…  And let me tell you, he’s a funny guy.  I had more than a few good laughs.

I think you’ve already got a good idea about some of the festivities, but the topper in this department was definitely the 25th anniversary of the Bram Stoker Awards on Saturday night.  The Stoker is basically the Pulitzer for horror writers, and the ceremony is like the Academy Awards.

As it was already a stretching of the funds to attend the conference, I didn’t buy a ticket to the Stoker banquet, but they were kind enough to let the unwashed masses in to stand in the back of the room for the awards ceremony.  And stand I did.  For probably two hours.  But it was worth it.

I did a strictly news write-up of the event at Gather news.  You can read it by clicking here.

What I didn’t say there (because they don’t really allow first person commentary) was that standing in the back of that room, I realized that I wanted to get my hands on one of those statuettes some day.

I’m sure I’m not much different from anyone else in that room in this desire, but I think that was the main reason I attended the convention.  I wanted to have fun, and I wanted to get a publisher to look at my work, but perhaps more than anything, I needed a little spark.  As Winter often does, the fires of inspiration and motivation had grown a little dim these past couple of months.

But now they are burning bright again.

Do you have a favorite convention or conference that you attend?

Do you have any good “celebrity” stories?

If your own motivation has ever flagged, what do you do to kick start it?

And again, so long as your comment has a little substance, I don’t mind if you leave a link.  I do it at your blogs; you might as well do it here 🙂

If you want to know more about the World Horror Conventions, click here.

Finally, I hope you check back next Friday for a little more nonfiction… or something.