The Imaginings was reviewed at Jamie O’Connell’s horror book review blog, To the Bone Reviews.  I was pleased with the three stars and his recommendation.  While it’s not as long as a few other blogger reviews, he has been kind enough to continue the dialogue with me via email.  To read the review, click here.

Speaking of The Imaginings, I recently realized that it was just about a year ago since I got serious about self-publishing.  The official release wasn’t until June of 2011, but I started the research, planning, formatting, designing, etc… last March.

What a year it’s been.  Next Friday, I’m going to talk a little about what I’ve learned and my feelings one year later as I am once again considering traditional (or at least small press) publishing.

I had an interesting confluence of events in my life recently.  If you recall from last week, I had decided that I wanted (or rather a few readers wanted me) to post something else from my nonfiction writings.

Over the weekend, I gave one of the extra print copies I made for WHC of Free Five to my aunt and her husband, Bill, both of whom are fairly well-versed in writing and/or publishing.  Without really expecting a review, Bill had some very nice words and rather blunt critical ideas.  As someone who had never traveled west of Wisconsin, one thing he said that did resonate is to write about the unique area where I live.

Much of what he said applied specifically to my neighborhood of southern Utah, but the West itself is definitely rich in story and character.  However, I had put his comments on a backburner by the time I went looking for this week’s post.

Of the randomly named files of my various road trips (usually just by date of when I was traveling), the first one that I tried was “June 07 trip log.”  This was actually from a ten day trip through the Southwest my wife and I took on our first anniversary.  This particular excerpt is from the first couple of days.

There’s something about the setting of the Southwest that makes it perfect for storytelling.  For starters, just think about the great Westerns, with dusty boarded sidewalks, perspiring prostitutes and sun-hardened men meeting at high-noon.  The stories of adventure.  The West in general is rife with these simply because of its location on the continent.  It represents the wanderlust of man, discontentment with the status-quo, taking a chance in an environment where every living thing must fight to stay alive, including the plants and animals. 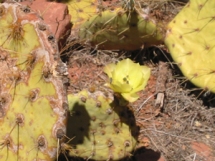 The wild still exists to some extent out here.  Tribes still practicing their magic.  Spirits walking the land.  Cowboys still battling with the elements to strike out a living.  Even aliens supposedly criss-crossing the skies (not necessarily “wild” but interesting when you consider that the western United States hosts 5 of the top 11 UFO sighting locations in the world).

In the eastern part of this country, people go to the mountains to vacation.  Out here, we go there to live.  Most people who spend any significant amount of time in their lives in the West have a difficult time leaving.

Thirty five miles south of Las Vegas, we enter California.  The sun makes imaginary water in the yellow-white sands of the distance, shimmering impossibly far away as I speed across the desert.  A hundred miles away from any major city, I see a few patches of houses.  Trailers and mobile homes actually.  They look almost as worn and weathered as the desert surrounding them.  As if the sands are wearing them down, breaking them into bite-sized bits which are slowly being digested into the shifting earth.

I wonder who lives out here in the middle of nowhere, the middle of the hot blazing desert.  There are mountains in the desert, but when I consider the miles of desolation in between them, those mountains might as well be on another planet.  I don’t see any movement outside these homes.  The people must have adapted, probably like other desert-living creatures, knowing that you don’t leave your dwelling in the hottest part of the day.  The only movement in this part of the world is that of the cars on the interstate, speeding by at 80 mph, heading somewhere better, and leaving these places to be devoured.

In Baker, we stop at the Alien Fresh Jerky store.  How could I not stop?  The signs talk about the multitudes of UFO sightings in the area.  It must be the heat.  The 134 foot-tall thermometer has the temperature at 104 degrees, and it’s only June.  But who knows?  Maybe it’s something more.  I’ve always believed in the possibility of aliens, wanted to believe in their existence, but somewhat akin to the idea of God, I’m still waiting for my proof. 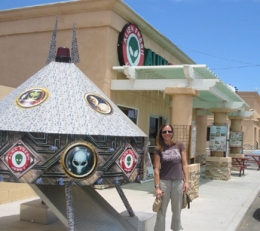 I’ve driven through parts of New Mexico on other trips, in the middle of nowhere, in the middle of the night, and I watched the skies almost as much as I watched the road, but nothing.  The closest I’ve ever come to seeing an UFO was driving another desert road at night.  In the distance, a single light approached with a strange shimmering glow underneath.  I kept my foot on the pedal of my truck, heading determinedly into an unknown fate.

Turned out to just be another truck with only one headlight reflecting off the blacktop of a road which still held the heat of the day.  I don’t know what I expected, but I was a little disappointed.

Ninety miles out of San Diego, traffic comes to a stop.  Shit.  Much as I tried to get out of Las Vegas early, it’s still creeping up on Friday rush hour as I’m coming into this city of 1.3 million people.  1.3 million.  I lived in Montana for seven years.  The whole state of Montana just barely broke the 1 million mark.  And to think I had considered moving to San Diego.

Ah, California.  It really could be almost another country.  If nothing else, they should split it up into two different states, North and South California.  While North California still tries to some extent to live in harmony with the nature surrounding it, with the exception of the beaches, South California almost seems to be at battle with the desert.  The cities are spreading out in every direction, eating the sand and spitting out sprawling cookie-cutter houses with carefully constructed climate-control systems to keep its citizens from acknowledging where they actually live.  The rolling blackouts of a few years back must have been a real wake-up call.

I think about all of these things as I crawl along the interstate at 10 mph.  At this rate, it will take me 9 more hours to get into San Diego.  I think that this can’t be just Friday traffic.  There must’ve been an accident, right?  Forty-five minutes later, my suspicions are confirmed, but not how I expected.  There was indeed an accident which had been slowing traffic, but it was on the other side of the interstate.

Amazing.  People had slowed that much to rubberneck at the tragedy going the other way.  I’ve seen this behavior before in the animal kingdom, prey watching from afar, from a safe distance, as one of their own is devoured by a predator.

We’re still animals really, regardless of our fancy cars.

Where are some places where you find inspiration?  Or at least fascination?

Any good alien encounter stories?  (I should probably be careful what I wish for, right?)

As always, links to your own blogs or sites are generally welcome.  I’m serious now.  Don’t assume people know how to find you, so make it easy on them.

Finally, don’t forget to check back next Friday for my “one year later” report.

16 thoughts on “Driving Through the Desert: A travelogue excerpt”

Leave a Reply to the happy horror writer Cancel reply