To see my complete listing of available works at Amazon (also available at Barnes and Noble), please click here.

Next Friday, I’ll be posting short reviews of short stories.  Two in particular actually.  Well, kind of.  The first will be a review of CW LaSart’s collection of shorts, Ad Nauseum, and the second will be Axel Howerton’s Living Dead at Zigfreidt and Roy.

As I’m writing this post, I can’t help but think of the movie “Poltergeist,” specifically the scene at the end (SPOILER ALERT in case you actually haven’t seen “Poltergeist”) where the caskets are popping out of the ground.

I can just see myself in one of those caskets, my grinning, desiccated corpse being tossed out of the casket.  Except in my hands I’m holding books.  Five of them to be specific (I know, a difficult task when you’re body is falling apart, but I’ve got ‘em).

Anyway, this post was inspired by TESSpecFic group mate Marie Loughin’s post, Books I Want to be Buried With.  To set this up, I’ll quote from Marie’s post (but check it out in its entirety when you get a chance):

Don’t get me wrong—I’m not against e-books. Guilt rides me every time I buy a print book, so these days I try to restrict paper purchases to novels I want to keep forever (and books that aren’t available as e-books or cost more as e-books than print). But even as I transition into a completely digital existence, I have this niggling concern that the great works of modern literature will be lost when civilization crumbles and the cloud evaporates into oblivion.

Therefore I feel it’s imperative to select some favorite novels to be buried with. That way, books found when I am exhumed by future archeologists need not be lost forever.

And that’s what distinguishes this from a list of my favorite books (or from my post, My Own Works Cited List: 10 books that have inspired me)

Although one of the books I’ve chosen is from that list.  It also is one of the same books Marie picked.  I think that’s okay, though.  When those future alien archaeologists exhume our bodies, maybe seeing more than one of us with this book will really get them to read it (note that I’ve transmogrified this meme to insinuate that there won’t be humans left to find my collection, but rather aliens). 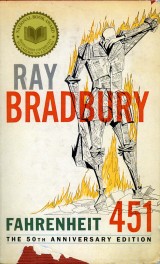 This was the first one to come to mind for me when I read about Marie’s premise, and I was pleased to see she had it as well.  I talked about it at my Works Cited post, but for the sake of this post, I think it will be interesting for future generations to see how prophetic Bradbury might have been (and in my opinion, looking at today’s society, how much he already got right).

Will we lose books entirely, banned not by the government but rather by the citizens in an attempt at Uber-Political Correctness?  Will we lose sight of the little things in life, the flowers and raindrops? Or even the bigger things, our own interconnectedness with those who are supposed to be closest to us?

And will I ever have a room composed entirely of surrounding full-wall interactive television screens?  Okay, so maybe that would be pretty cool 🙂

I think Orwell should’ve pushed the date a little farther into the future for the title of this book.  Do I think we’re there yet?  Not quite, although I think the Patriot Act was a step in the direction Orwell was hinting toward.  I think we still have our eyes open enough, but with more and more electronic distractions and the seemingly increasing lack of short term memory in our citizenry (especially where politics is concerned), I don’t imagine it will be long until we have at least a Ministry of Truth to change the past if it doesn’t match with our present state.

3- The Holy Bible: The Christian God… or some guys’ interpretation thereof 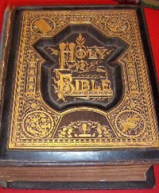 Whether or not I agree that this book contains all the truths of the universe, I think it has to be included for those future alien archaeologists.  After all, aren’t we all fascinated by past (and in some cases present) cultures’ deities?  In school we learn about Greek mythology and the various Greek and Roman gods. And aren’t some of them cool?  Then there are native culture gods, goddesses and spirits.  And have you ever looked into Hinduism?  They have millions of gods.

But back to the Bible, when it comes to a study of our civilization, there’s no doubt that this book was a cornerstone in our foundation.  It’s interesting to wonder if the future will give us any solid proof one way or the other as to its validity.  And even though I’m not much of a practicing Christian, I can’t deny the influence it had on my own upbringing.

Plus, if they have any records of who I am (or rather was), they’ll be a little confused that I chose to include it.

Speaking of who I am…

Okay, I know I kind of cheated on this, but I do own a book that is the complete collection.  It’s just one book, so it counts.  And it’s my blog post.

Anyway, Poe wasn’t my first horror influence, but he definitely is one of them.  In fact, if you read my novel, The Imaginings, there is a whole section that is a not-so-subtle homage if you’re a fan of Poe to his fears of being buried alive (right off the top of my head, I can think of at least three stories that deal with this fear).

However, beyond his influence on me personally, it can’t be denied that he is a huge influence on many horror writers.  But his impact also reaches into thrillers, mysteries and even poetry.

5- Either Misery or On Writing: Stephen King

This choice is obviously another personal one for people (or aliens) to understand a little more about this corpse popping up with a bunch of books in his hands.  To be a horror writer is to lead an interesting life to say the least.  And Stephen King captures that in both of these books.

Originally I intended to put in Misery because it’s just a great story with the only monster being a real person (some of the scariest of them all).  And not just any person, but a fan.  Misery isn’t my favorite King book, but the plight of Paul Sheldon, both in his decisions as a writer previous to meeting Annie Wilkes and then after, combined with the book-within-a-book motif really give the layperson an idea of what it is to be a writer.

Then I thought about On Writing, his nonfiction memoir/writing advice book.  This is a great one that tells the real (or as close to reality as memory allows) story of this master of horror.  For the casual reader, there is the same folksy conversational tone we expect from King, full of humor and real life horror, and for the avid writer, the second half of the book is full of practical advice.

I guess if I had to choose between the two, it would probably be On Writing.

But you’ll just have to dig me up some day to find out for sure.

Any comments on my choices?

As always, links to your sites are welcome.

Besides Marie, a couple other writers I know who posted on this topic with their own choices are Jonathan D. Allen and Ken Preston.

Finally, don’t forget to check back next Friday for my review of Ad Nauseum and Living Dead at Zigfreidt and Roy.

28 thoughts on “My Corpse as a Capsule: 5 books to put in my casket”