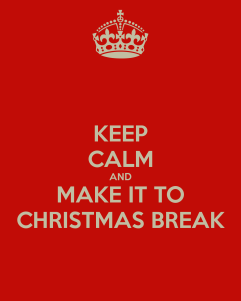 As of the release of this post, I am officially on Christmas break!  And believe me, while it’s a break from school for the students, for teachers, it’s a well-needed break from 400+ teenagers 🙂  Over the break I plan on really digging into my WIP.  I’ve been working in fits and starts the past month or so, and it’s my goal to use this break to really get it going full steam.

If you’ve followed my blog for any amount of time, it’s not secret that I’m not betting on the future until tomorrow morning.  So we’ll see.

However, if we make it through today, because of my drive to get things going with the WIP, I’m going to take the next two Fridays off from the ol’ blog.  But don’t worry, I have a few ideas in the can that I’m looking forward to.

Speaking of my irrational paranoia about the end of the world, I really didn’t intend the timing of this piece with today.  It just worked out that way.  I wrote this foreword to Somewhere in the Shadows back in September and figured I’d post it on my blog to drum up some publicity for the anthology.  But here we find ourselves on 12/21/12.

A few words about Somewhere in the Shadows before I continue.  I enjoyed it.  There.  Ha ha.  Just kidding.  You all know I’m incapable of stopping there.

But I did enjoy it.  The anthology starts with a couple short-short pieces, enough to grab your attention, make you grin and grimace, and then plunges you into the longer pieces.  In addition to my foreword, Andrew Cyrus Hudson (the assembler of these authors) does a nice job giving short introductions to the groupings of the story.  I liked that he took the time to group the stories together by content, and I think his introductions lent a sense of cohesion to the anthology, whereas some anthologies feel more thrown-together with almost a jarring sense between pieces.

Like most anthologies, there were a few stories I didn’t care for, but they were for minor reasons.  While I enjoyed most of Blood Line (besides a flash piece here and there, I don’t think I’ve read a werewolf story, and this had some great stuff), I felt the ending was a little predictable.  And when it came to Going Viral, [SPOILER ALERT] while I liked the humanization of the zombies, if you have a first person narrator, you generally can’t kill him off in the end.  It’s one of my pet peeves.

However, there were some real gems.  I have to give props to Andrew Hudson, who managed to bring great tension to probably the slowest pace I’ve seen (literally… you’ll just have to read it) in his Highway.  And my TESSpecFic group mate Jonathan Allen didn’t disappoint with his eerie-then-downright-freaky On the Air.

The interesting thing is that many of the stories had open endings, and I was sad to reach the end because I had wound myself into the story and wanted them to keep going.

So it’s worth the 99 cents to pick this one up.  That is, if the world doesn’t end today.

Because, NOW without further ado…

Waiting for the Lights to Go Out: a foreword to Somewhere in the Shadows

A few years ago, a guy I went to high school with wrote his doctoral dissertation on zombies.  More specifically, on how the zombie invasion phenomenon in film and literature is a result of our shared cultural concerns and fears.  He went on to turn this dissertation into a book published by McFarland and Company (American Zombie Gothic: The Rise and Fall (and Rise) of the Walking Dead in Popular Culture).  We weren’t necessarily that good of friends in high school, but after I discovered this, I realized perhaps that was too bad.  Maybe we had more in common than I thought.  And his ideas?  Brilliant.

But with a little examination, are his ideas that new?  Well, maybe drawing the correlation between the zombies rage of the past ten years and the terrorist attacks of 9/11 is unique, but it doesn’t take much scanning through the horror section of your local video or bookstore… wait, I guess that would actually be Netflix or Amazon… to see that we are living in a great (if not slightly terrifying) age for horror in general.  The stories are a mirror of our times, and what times they are.  It seems like every month there is a new potential portent of our imminent doom that we have to survive, from November 11, 2011 (11-11-11.  Yup, there are actually two movies out there with said title) to November 6, 2012 (you better believe that there are members of both political parties willing to bet the end of the world will depend on who wins this next election).

Novels like Justin Cronin’s The Passage (which has made it into my top ten horror novels) purport that our warlike tendencies will turn against us.  If it isn’t human nature, movies like M. Night Shyamalan’s “The Happening” try to convince us that it will be Mother Nature that will do us in.  And while there may be those who say the Mayans weren’t taking leap years into account, the abundance of movies and documentaries on 2012 tells me that many of us won’t be able to breathe easy until we’ve passed this holiday season without finding ourselves fighting to get on a modern day Noah’s ark with a bunch of rich assholes… and John Cusack.

[A related sidenote:  Speaking of rich assholes and news as fodder for fiction, as a horror writer, one of my favorite photos from the Occupy Wall Street movement was a woman holding a sign which read: “One day the poor will have nothing left to eat but the rich.”  It was enough to spur me to write my own story centered around the movement entitled The Golden Parachute.]

So fortunately for us horror writers, the words of General Kurtz still ring true today.  “The horror!  The horror!”  The fears on which we can play are a simple click of the mouse or remote control away.  In addition, writers and fans alike are now being able to reap the rewards of the e-revolution in publishing, a movement that is giving even more fuel to the proverbial fires.  Whereas not that long ago, I would’ve said we were witnessing the unfortunate death of the short story as an art form, now I would say we are seeing a rebirth (something Stephen King made a plea for ten years ago in the introduction to his own collection Everything’s Eventual).  A recent search on Amazon for “horror short stories” brought 19,166 results.  And if you want more bangs (or fangs) for your buck, the rise in popularity of small press and independent publishing means horror audiences are getting the chance to see short stories via anthologies such as this one from fresh new talent that might not have the opportunity to get their work read otherwise.

So now if you’ll excuse me, I’m going to get stocked up on candles, shotgun shells and canned goods, because you never know when everything is going to go to hell, and I want enough supplies to at least finish reading Somewhere in the Shadows.

– Thoughts?  Have there been any anthologies that you’ve picked up recently that have really blown you away?  I always like recommendations.

– If you knew the world was going to end in 24 hours, what would you do? (Keep it somewhat clean, people.  My parents read this blog.  They’re not prudes, but still… 🙂 )

– Otherwise, I’ll see you in three weeks.  I promise.

10 thoughts on “Waiting for the Lights to Go Out: On the state of horror… and the world?”