Some of you may have noticed that this isn’t what I promised last week.  I’ll explain shortly.  And to maintain the variety, I won’t be posting another story next Friday (you’ll just have to wait).  Instead, I’ll be talking about book censorship, book banning, and how we white guys need to remember our place.

Last week I touted how my story this week (Waiting for the Train) at just over 1,700 words was the shortest piece of fiction I had written in years.

That was until I ran across Friday Flash Fiction, hosted by Vamplit Publishing.  The goal?  Take the weekly topic (in this case, Hidden Places) and compose a complete short story at less than 1,000 words (for most of us, that’s less than four pages).  My first draft was 1,210 words, which meant I had to cut almost a full page while still maintaining the crucial content of the story.  This was an amazing exercise that tested not only my sentence structuring, but also decisions about which details were essential to the story.  So at a final count of 999 words, I hope you enjoy… Run, Rabbit. Run. 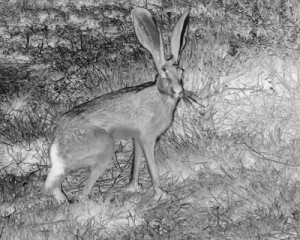 There was something about jackrabbits that always creeped out Pete Cantrell.  Something about the way they moved.  More gangly than their cuter cousins, they loped along when they walked, as if evolution got stuck somewhere between a cottontail and coyote.

Not long after Pete and his wife Wendy moved into their house in the middle of twenty undeveloped acres, Pete had a nightmare in which the world was a scarred apocalyptic landscape.  The only humans that had survived were distorted into twisted creatures scouring the wasteland on all fours.  In the nightmare, these aberrations loped, and they had the same glassy, lifeless marbled eyes of the jackrabbit.

Ever since, it seemed like whenever Pete went outside, there was one standing there.  Staring at him.  Watching him with those glassy, lifeless marbled eyes.

But not this morning.  On weekends Pete liked to get up before Wendy and go for a walk out on his property.  He would follow the deer trails through the brush and juniper trees, crossing a wash where the land dropped down, ending at a small copse of junipers, a quiet spot where he liked to go be by himself.

There was a chill in the air this morning.  Autumn was getting ready to give way to Winter.  It was late enough for the sun to have risen over the mountains, but it was hidden behind gray clouds.  Even the birds were silent as Pete made his way away into the maze of sagebrush.

As he walked, he kept his eyes down, scanning for arrowheads or fragments of chipped stone from tools that had been worked.  Several hundred years before any white faces found this part of the world, this land had been Fremont Indian hunting grounds.  To date, Pete had only found chipped off pieces, but where there were chips, there were usually tips to be found also.

He was almost to the clump of trees–his “thinking spot”–when he spotted something metal off to his right.  He stepped over some brush, bent down and picked up a metal lunchbox with pictures from the old Lone Ranger TV show.  It even showed Tonto.

Something shifted inside when he picked it up, and Pete opened it.  “I’ll be damned,” he said, pulling out a plastic baggie.  The lunchbox also contained some cigarette rolling papers and matches.

Pete hadn’t smoked grass in years, but the familiar scent wafting out of the lunchbox brought back old cravings.  He looked around to see if he could spot anyone.  The closest road was back by his house, probably a half mile, and the next house was at least a mile.  Kids must be going to some pretty great lengths to get high these days.

“Their loss,” he said.  Figuring some teenager must’ve ditched the lunchbox, he continued to the trees where he sat down in the dirt and rolled a joint.  The weed was potent, and it only took a couple puffs to feel the effects.  He was about to lie down on his back when he saw a flash of gray movement not ten feet away behind a clump of sagebrush.  He jumped up, his first thought being, Coyote!  He was ready to make a dash, but before he could, he saw a jackrabbit instead.  Probably the biggest one he had seen, the size of a small mutt.  And almost as mangy.

Pete’s heart slowed, and he laughed at his previous panic.  The jack just stared at him.  Pete reached down, picked up a rock and threw it at the rabbit, but the rabbit disappeared.  “What the…?”

Tentatively (it wasn’t a coyote, but it was still a wild animal), he stepped toward where it had been.  There was a dark hole in the ground, probably a foot in diameter, like a little cave slanting underground.  Even with all the rabbits in the area, this was the first time Pete had found the entrance to one of their hutches.  It surprised him how big the hole was, and he hesitated before getting much closer.  He didn’t see the jack, but he knew it was down there, probably just out of range of the light.  He raised himself up on his tiptoes to try and see a little further into the hole.

That’s when he spotted the arrowhead lying in the dirt a few inches past the lip of the hole.  Possibly obsidian.  Black in the center, but like smoky glass at the edges.  Beautiful.

Just a few inches into the hole.

Just before the line of shadow.

Pete broke a dead branch off one of the junipers.  Holding it in one hand like a club, he reached slowly down towards the hole…

Wendy Cantrell woke with a start.

Had she heard a scream?

She dismissed it as a remnant from a nightmare.  She swung her legs off the bed and hopped across the cold hardwood floor to her slippers.  She wrapped herself in her robe before walking into the kitchen, pouring a cup of coffee and heading out onto her deck.  Pete was usually back from his morning walks by now, but sometimes he lost track of time.

Just as she was sitting down, a jackrabbit scrambled out of the sagebrush.  Wendy didn’t hate the jackrabbits like Pete did.  In fact, she sort of liked them.  They were survivors in a world full of predators, including gun-happy rednecks.  But one thing she could agree on was that there was something a little unsettling about their eyes.  Staring, unflinching, cold.

But this one was different.  It appeared more frantic.  Panicked.  It stepped one direction, looked quickly side to side, then started in another direction.  Then it spotted Wendy on the porch and stopped.

For a brief instant, Wendy had a crazy thought.

But before she could make sense of the thought, a coyote bolted out of the brush in a snarl and tore the jackrabbit off the ground in its maw and disappeared back into the wild.

While part of me wants to know what you thought of the story, I’m more curious to know if there are any creatures out there (real creatures, that is) that give you the creeps.   And if you liked this, be sure to check out Vamplit Publishing to see other examples of #fridayflash horror fiction.

And don’t forget to check back next Friday for my discussion of book censorship, book banning, and how we white guys need to remember our place.