Recently I passed 70,000 words on my WIP–the industry standard for minimum length of a novel.  And I’m still going.  Time to bring this baby to a close.

But I thought this merited a quick break to give some love back to my blog.

So without further ado…

WARNING: SPOILER ALERTS ALL OVER THE PLACE

Not long after my daughter was born, I discovered that Pet Sematary had made its way to the top of our Netflix queue.

Before it could be sent out, I moved it way down the line.  Since then (over three years), the Netflix instant movies have become more of the way my wife and I view movies (in those rare moments when we can actually watch a movie), so it has taken almost all of this time for Pet Sematary to make its way back up (and now it’s on instant too).

My son was born a little over a year ago.  I pushed the movie back again.

As I told my wife three years ago, as a father who absolutely adores his children, I’m just not ready for that scene with Gage.

This got me thinking about another Stephen King movie, The Mist (I know they’re not his “movies,” but you know what I mean.  I have read both of these stories).  I saw this one before I had any children of my own.  I went with my parents and my older brother (a father of three children), and at the end, they were absolutely incensed.  Personally, while I was stunned by the ending, I wasn’t necessarily mad.  I thought it was bold.

But thinking back on that event, I started to wonder.  From a parent’s perspective, which of these two movies is worse? 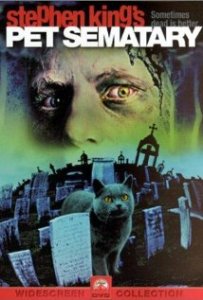 – The little boy, Gage, is run down by a semi-truck.  That’s bad enough, but what caused a hitch in my chest even when I didn’t have children was the quick series of flashbacks to photos of Gage’s life starting as a baby up until the moment he dies while his father is collapsed on his knees, screaming in torment.

– The fight in the funeral where the casket is knocked over and you see his little arm.

– The emotionally agonizing scene where his father has to inject him at the end, and Gage starts crying.  Not crying like the monster he has become at this point in the movie, but like a small child would cry when you stick a needle in his arm.

– It’s really just the ending, an ending which wasn’t in the original short story written by King.  It was an ending that was written by Frank Darabont (who also did the screenplays for King’s movie adaptations of Shawshank Redemption and The Green Mile), an ending that King was quoted as saying would’ve been the ending he would’ve come up with “if he had the balls” (or something along those lines).  In a situation that seems hopeless, the father shoots his own son, presumably to keep him from suffering a worse fate, just before the proverbial cavalry shows up.

Pet Sematary– The only reason I can see for Gage’s death is that his father has messed with the balance of the universe, and he has to pay for that trespass.  It starts with the cat.  When the family cat dies, he should’ve just let well enough alone, buried it, allowed proper time and then introduced a new pet into the family.  I believe that had he done this, there wouldn’t have been the universal payback.  However given the opportunity, what father wouldn’t at least consider resurrecting the family pet if it would make his little girl happy again?  But as the famous line goes, “Sometimes dead is better.”

The Mist– First off, this is about mercy.  I read Of Mice and Men with my classes, and while they generally hate the ending, I have to tell them that George’s act was one of mercy.  Second, as with Pet Sematary, the father gets punishment.  At an earlier point in the movie, he doesn’t help a young mother who leaves the safety of the grocery store to help her children.  As viewers, we assume that the character dies (shame on the father, but again, can we blame him?), but the movie makes a point of showing this woman (and her family) alive on one of the trucks that rolls by the grief-stricken father at the end.

I gotta say that, while I haven’t been able to muster the courage to watch either of these since having children, I believe that Pet Sematary is the harder of the two.  For one, the sense of why the child dies isn’t as strong by the time it happens in Pet Sematary.  Also, if that scene with all the snapshots choked me up before I had kids, I can only imagine today.  And then you have the whole rest of the movie to deal with, including killing said child after he turns evil.  With The Mist, this shocker to the parental sensibilities doesn’t happen until the end, and you can turn off the movie and walk away.

So that’s my vote.

Have there been any other books or movies that you struggled with along these lines, whether you’re a parent or not?

Finally, I know that my blog has been very quiet as of late, but please subscribe to receive posts via email or RSS feed (on the right hand column) so you won’t miss anything when I do get the opportunity to say something.  NO SPAM, I promise.

21 thoughts on “Pet Sematary vs. The Mist: Which Stephen King movie is harder on parents?”